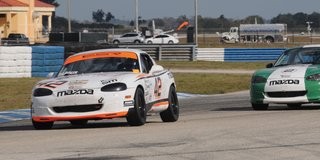 Incidents in both of the morning contests resulted in race lengths shrunk from the posted 25 minutes to just 20-minute sprints after lunch.

For the Spec Miata field, that may have been a good thing, as Preston Pardus put on a show in the No. 42 Danus Utilities/East Street Racing/5x Racing Mazda Miata. Leading from pole, the 2017 National Champion was chased by Jim Drago and Elivan Goulart, both former champs themselves.

Even with the talent behind him, Pardus kept the point and between a length and three lengths throughout the eight-lap race.

“It was a pretty fun race,” Pardus said. “I had Jim and Elivan and luckily it was a pretty clean race for me. They started racing behind me for second a few laps into it, and I was able to make a little gap there at the end.”

Though Goulart tried to work with Drago to challenge Pardus, it was clear with a lap to go that they had nothing for the hot shoe. Instead, Goulart peeled off going into Sebring’s tight final corner and drove to the inside. That proved the right move, as Goulart was able to sneak into second place at the stripe by just 0.153-second.

Ron Bartell nearly put together the drive of the day in H Production and set up a classic race between his MG Midget and the No. 86 Karma Racing/Linfert Performance/Boles Racing Volkswagen Golf. With bad luck mechanical issues during qualifying, Bartell started from the rear of the field and reeled in Ellis on lap five. With the pair going back and forth, a spin by Bartell with one to go left the door open for Ellis to sneak back by.

Ellis crossed the stripe in front for the win.

“It was a great race,” Ellis said. “I was actually on pole position, because Ron Bartell didn’t qualify. He started from the back of the field and actually caught up to me, which really surprised me. I didn’t think he could catch up to me. After he caught up with me, I was able to stay on his tail and he made a little mistake braking too hard and he spun. Luckily there was only a lap left, so he couldn’t catch me again.”

In the same group, John Phillips kept his No. 43 Hoosier/Carbotech/PhillipsRacePrep/HPD Honda Fit just in front of David Daughtery in a nearly identical machine for the full race distance, crossing the stripe two small car lengths in front at the checkered flag.

“We’re trying to make some adjustments on my other car, which David Daughtery drove this week,” Phillips said. “We changed the springs on it, and we’ve kept working on the springs on my car and we think we’ve got them pretty close now. It was a good race. He never gave me any breathing room, and I love racing like that.”

Saturday concluded with a fabulous participant party held in the Gallery of Legends building in the Sebring paddock, where volunteers, friends, drivers, crew and family enjoyed food, drinks and a final round of bench racing. But when Sunday rolls around, drivers will again strap on the helmet for a 14-lap or 35-minute race, beginning at 8:30 a.m. local. Follow all the action live at www.scca.com/live.