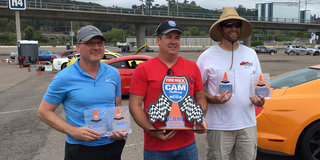 Tire Rack SCCA Match Tours are National Solo® events designed to introduce new participants to national-level competition. The first day of competition consists of two sessions in which drivers make three runs on the same course. Each driver’s best time from each session is combined to determine class winners. The second day starts with a qualifying session on the same course as Saturday. The fastest eight drivers as ranked by PAX from each heat are eligible for the Top Dog Challenge. The next eight are eligible for the Under Dog Challenge. Additionally, eight names are drawn at random to fill the Lucky Dog Challenge. This event also doubled as the Southern Pacific Tire Rack CAM Challenge, opening a fourth Challenge for the top eight drivers from each of the three CAM classes. This past weekend, competitors took the course at the Tire Rack San Diego Match Tour to test their skills.

In Street Touring Xtreme, it became clear by second runs that Adam Tarnoff and Derek Punch would be in a tight battle for the class win. On that run, Tarnoff laid down the fast time for the day, with Punch about a second back. In the afternoon, Punch set the fastest times of the session, but a cone on his first and fastest run kept in from overcoming the deficit. It was Tarnoff ahead of Punch on the final results by 0.780 second.

The CAM Challenge event drew a large contingent of CAM C drivers. In the 16-driver class, the lead changed numerous times between the top competitors throughout the day. By the end of the first heat, Jordan Priestly was on top in the Ford Mustang GT350, but by the end of the afternoon, his co-driver, Paul Molina, had taken over the top spot. His margin of victory was a mere 0.110 second. Michael Horn snagged the final podium position while Todd Cameron and Brian Stafford claimed the fourth and fifth trophy positions respectively.

In Sunday morning Challenge Qualifying, once again Paul Molina topped the CAM C rankings, but in the Challenge, it was his own co-driver, Priestly, who knocked him out of the running. Horn would emerge from the bracket on top, to face David Rock from CAM S and Chad Ryker from CAM T, both winners of their bracket and their class the day before. As the fastest from each CAM class took to the course, each driver got two attempts at the course. Ryker snagged a cone on his fastest attempt while Rock was perfect, claiming the win by 0.193 second over Ryker.

The final round of the Under Dog Challenge was a faceoff between Steve Coe from H Street and Pelton Barnes from Street Touring Xtreme. Their times were close on first runs and both drivers found about a half second on their second runs. After the calculators were punched furiously, Barnes was declared the winner by 0.001 second.

The Top Dog Challenge brought together Mark Hazboun from E Street, Patty Cook from H Street Ladies and Jeff Kiesel from E Modified. Hazboun hit a cone on his first run, giving him a long road to climb. Cook laid down her best run of the day to get into the final round of the Challenge and nearly matched it on her first run. Kiesel found 0.713 second on his last run, but it wasn’t enough. Patty Cook was the winner in the 1995 Jaguar VDP.

In the final round of the Lucky Dog Challenge, John Kinton from A Street knocked out Tyler Moore from CAM T.

The 2019 Tire Rack Match Tour continues in two weeks in Bristol, Tennessee. Find out more about that event and the Match Tour program here.