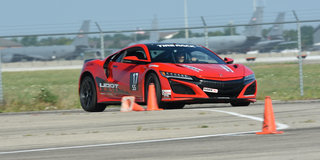 The 2019 Tire Rack SCCA Championship Tour season concluded this past weekend in Peru, Indiana with the ninth event of the coast-to-coast traveling series. Competitors faced dry and pleasantly breezy conditions all weekend while tackling the fast and technical course designed by Raleigh Boreen.

Street Modified became an entertaining home for misfits with ASP and ESP drivers bumping up for competition. Clint Griest piloted his ESP-prepared Mazdaspeed 6 to the win in a pretty convincing fashion, leading from the fist run on. His margin of victory over Jay Bullington, in the only true Street Modified car in the class, in the Audi S4 was 0.442 second. Bullington offered his car to five other drivers in SM, SSM and XP, earning second-place trophies in both SM and XP. Devin Taylor, also bumping from ESP, piloted his Chevrolet Camaro to the third and final trophy position, 0.315 second behind Bullington.

The five-driver F Street Prepared class featured some of the most competitive cars in the class for a battle almost exactly one month before Solo Nationals. On day one, Greg Anthony came to grid with an issue with an alternator belt. Rather than changing it before the heat and risking missing his first run, he took one run and changed it before his second, without taking a mechanical. That second run was fast enough to take the lead heading into day two. Cones were problems for both Andrew Blasiman and Geoff Zimmer, each hitting one on their fastest runs one of the days. Clean times for either on those runs would have knocked Anthony out of the top spot, who took the win by 0.054 second over Blasiman in the second and final trophy spot. The top four drivers, including Buckie Maxey in third, were separated by just 0.367 second.

F Modified was well, and loudly, represented by seven drivers vying for three trophies. Will Lahee led after day one on the strength of his second run with Brad Smith in second, 0.264 second back. Josh Kikta was about a half second farther back in third, in a virtual tie with Dan Wheeler. During first runs on Sunday, Smith laid down a decisive run almost a full two seconds faster than any other drivers in their first runs. Smith would stand on that run, partially because he returned to grid after his second run with a front hub failure. Lahee offered his spare which happened to be the same style and the entire FMod grid banded together to get the hub changed during a mechanical in time for Wheeler’s third run, during which he knocked Lahee out of the second position by just 0.097 second. After, Lahee said, “it was the right thing to do.”

The final margin of victory came down to 0.003 second in Super Street where Joel Zeller led after day one competition. During the first runs on Sunday, Josh Lipman took over the lead and held onto it until Zeller went out and laid down the fastest time of the day on his last run. Lipman saw this before taking his final run, knowing exactly what he needed to win. The raw time was there, but he tagged the last apex cone on the course, handing the win to Zeller. James Yom and Dean Rindler claimed the third and fourth place trophies respectively.

In A Street, the top three drivers on day one were separated by just 0.078 second with Dan Simms leading over co-drivers John Wolf and Bill Bostic. With no dirty runs between the three of them, all three drivers saved their best for last and improved on their last runs both days. Bostic and Simms traded the lead back and forth on their second and third runs on day two with Bostic landing the top spot by 0.134 second. Wolf finished another 0.296 second behind Simms in third. Kristo Kukk and William Damhoff claimed the remaining trophies in fourth and fifth respectively.

If there was a question of the strength of the new Yokohama 200 tread wear tires, Street Touring Sport may have answered it as co-drivers Emanuel Martin and Adam Deffenbaugh took the win and second place respectively in a Mazda Miata clad in the new “Yokos.” Mark McKnight claimed the third and final trophy in his Honda CRX on Bridgestones, just 0.013 second behind Deffenbaugh. This was the first Tire Rack SCCA Solo® National Tour victory for Martin.