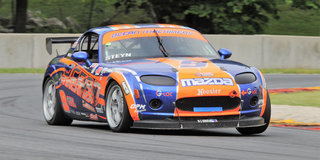 The Road America stop on the Hoosier Racing Tire SCCA® Super Tour was a bit of a mixed bag of rain, sun and excellent racing. In this installment of the Hoosier Super Tour Video Series, we will watch the WeatherTech Chicago Region® June Sprints® unfold for well-known Mazda Miata racer Danny Steyn, and the father-son Loughead family driving their Formula Vees. The June Sprints is always an exciting weekend, and the video below is but a taste of what it’s like to compete at one of SCCA’s most historic Road Racing events.

In Saturday’s Spec Miata race, Steyn finished sixth. Sunday, he displayed brilliant rain racing prowess and pulled out a huge lead until the track dried. Struggling to keep his tires under him, he managed to hold onto third with some excellent defensive driving. In the Super Touring® Lite class, Steyn swept the weekend by taking wins both Saturday and Sunday.

The Lougheads performed well throughout the weekend, too. On Saturday, Jeff Loughead finished third and Graham Loughead sixth. On Sunday, the duo diced it up again in the ultra-exciting FV class with Jeff claiming second and Graham earning another sixth-place finish.

The Hoosier Super Tour Video Series has one last stop to make this year at WeatherTech Raceway Laguna Seca, and then its off to the Runoffs! Get ready, because the stakes only get higher from here.