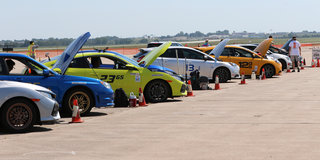 Every year, drivers come from far and wide to compete in the Tire Rack SCCA® Solo® Nationals. And each year Solo’s “official-unofficial” historian, Rocky Entriken tracks the results of each in his Solo Stats book.  Entriken began the book as personal notes for writing the official SportsCar coverage of the event, something he has done every year since 1973 and the first Solo Nationals. Since then, it has come to be the record of every driver to compete and the authoritative account of event achievement, recording everything from winning streaks to margins of victory -- and a bit of a favorite for the Solo stats nerds in the community. So, without further ado, on to the numbers:

4 - The new, all-time number of women to win an open Championship, with Tamra Krystinik taking the win in DSP driving a Mazda RX-8. She claimed two Ladies Championships in CSP before moving on to DSP. This is her third Championship in five attempts. If we are counting all open class wins, the number jumps to six with Olivia Hammoc joining the illustrious list by winning JB this year as well. The other ladies to win championships are Shauna Glorioso Marinus in ASP, Rita Wilsey in BSP, and Brianne Corn in BM. Mary Pozzi rounds out the open class winners with a victory in CAM-T.

4:59 p.m. - The latest time any competitors were taking their runs on any day. One of the key factors in this was changing the course workers over on the fly. With the workers effort and hustle, the event moved along very efficiently even with random stoppages for things like lightning.

10 - The current winning streak of Shawn Kiesel in EML, putting her third all-time among women. Husband Jeff Kiesel nabbed his 13th Championship, which has him sitting second all-time to John Thomas. Rarified air for both wife and husband, driving the Mean Green Sprite out of San Diego, California. When you include son Zak Kiesel’s win in FM this year, the family now has 28 total wins! That makes them the winningest family in Solo Nationals history, ahead of Ron and Karen Babb and the Berry family.

11 -  The number of times the Tire Rack SCCA Solo Nationals has been held at Lincoln Airpark, which ties with Forbes Field for the most all-time for any one venue. The City of Salina in Kansas has 15, and Topeka has 14 -- but both of those include multiple locations.

13 - The number of different makes/models in B Street this year (53 entries total). To make it even more impressive, the top eight consisted of eight different cars!  It also marks the first time a production EVM has won a championship, with David Marcus winning in a Tesla Model 3 Performance.

17 - The consecutive trophy appearances by Annie Gill (GSL National Champion this year), which puts her in a tie for the longest streak of trophies amongst all women. Even more impressive?  She would have been second in GS open by a scant .164 seconds this year!

28 - The amount of times Mark Daddio has both been to the Tire Rack SCCA Solo Nationals Championship AND has trophied. The man simply does not, not trophy. The number is also significant as it is the number of times Erik Strelnieks and Jack Burns have also trophied, keeping all three drivers in a three-way tie for sixth all-time.

45 - Total number of rows for paddock this year. With the change in paddock layout, due to site repairs required by the Air Force, paddock was extended up into where the Test ‘N Tune course had always been.  Personal mobility devices are highly encouraged for those parking in the “North Forty.”

71 - Number of entries in A Street. The largest class this year, and fourth largest of all time. It produced a great battle, which resulted in Josh Luster taking home his first National Championship Jacket.

7,644 - The number of dry runs this year.  A brief storm on Tuesday afternoon occurred between heats on both courses, and the lightning delay was just long enough for both courses to dry completely.

8,352 - As of this writing, the approximate number of hours until the 2020 Tire Rack SCCA Solo Nationals begin.