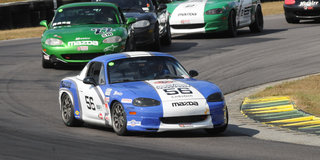 By no means did the win come easy for Buras. For the entire 15-laps, Buras had a competitor glued to his bumper trying to utilize the draft to overtake for the lead. The tried and true towing strategy only worked once when a three-long train of Spec Miatas, lined nose-to-tail and led by Ross, worked in perfect unison down the front straight to edge out Buras around the outside of Turn One. Buras dropped back to fourth but quickly worked his way back to first in two laps, officially beating all challengers gunning for his No. 56 Hoosier/East Street/KKD Mazda.

“YEAH!” screamed Buras while pumping his fists in the air. “I am way beyond happy. Twenty-one years of racing SCCA and we finally did it. My car number is 56 and this is the 56th year of the Runoffs, it was just meant to be. I went down on a bike yesterday and broke two ribs, so each lap was agonizing but so worth it.”

Pardus started and finished the race in second, but his race wasn’t as cut and dry as the results showed. On the start, Pardus got shuffled back to sixth before he dropped back to 10th following a bobble entering a turn. Pardus clicked off a few fast laps, contesting competitors two- and three-wide into challenging areas on the track. By the penultimate lap, Pardus made it back to second. Kissing his teammate’s bumper down the back straight, Pardus attempted to draft to take first, but his efforts were unsuccessful as Buras held his ground.

“Every time I made a move today, I made the wrong one, getting shuffled back,” Pardus said. “I finally made some good moves. I tried to make a move on the back straight on Todd, but he showed me how to drive this track. It’s the Runoffs and it doesn’t matter that we are teammates. We raced each other clean, but I wasn’t going to just let him walk away with a win.”

Charging from a fifth-place start, Ross lead the race for two laps before falling back to sixth. Ross spent most of the round fending off Elivan Goulart and Jim Drago before shaking them off to focus on Brain Henderson. On the last lap, battling two-wide around several turns with Henderson, Ross edged out the Virginia native for the last step on the podium, his second top-three Runoffs finish of his SCCA career.

“My crew chief said if there was any chance to take the lead, do it, because there you can control the pace,” said Ross. “I pushed forward and saw an opportunity and decided to take it. I got real excited when I saw that I gapped Todd by four or five car lengths coming out of Hog Pen, then by turn one everyone was right back on me. Today was all about draft racing, and the cleanliness of this race was exceptional.”

Henderson finished fourth with Goulart, of Shelton, Connecticut, rounding out the top five. And Jesse Singer, of Miami, Florida, earned the Sunoco Hard Charger, improving 27 positions from 55th on the grid to finish in the 28th position.

Live, online video coverage of Runoffs races, presented by Mazda, is available throughout the three days of competition at SCCA.com/live. An audio race call, supplied by the Super Tour Radio presented by Hoosier Racing Tire broadcast team, is also available at www.SCCA.com/live, as well as live timing and scoring for each National Championship race.