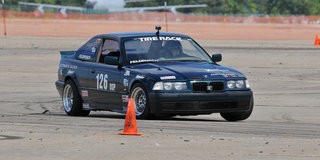 Michael Feldpusch, one of your 2019 Tire Rack SCCA® Solo® Nationals course designers, was born and raised in Annapolis, Maryland up until 1999 when he relocated to Boulder, Colorado to be a Snowboard Instructor. He currently lives in Westminster, Colorado just outside of Boulder and is a Network and Systems Architect for CenturyLink (formally Level3). Michael says his life outside of autocross and cars is “being a father and husband to my beautiful family, as well as an addicted CrossFit athlete.” You'll find him in the local CrossFit gym in Lincoln during Nationals week in Nebraska as it is his way of "checking out and resetting mentally" after a long day. Aside from CrossFit, he has been snowboarding for 34 years and is a fully certified Snowboard instructor; although he says his "official" instructing days are over because of wanting to spend time with his family. But when the kids get older, he says he may re-visit that part of his life.

JH:I know we have a few snowboarders that attend Nationals.  Did you ever compete, or was it always just recreational?  Is there a type of snowboarding you specialize in?  Halfpipe, big air, back country powder runs?

MF:Never competed -- too old -- and purely recreational. I was THEmoguls snowboard instructor at my ski resort. I often gave advanced lessons to folks that just wanted to learn how to ride better, more efficient, and tackle any terrain like steeps, moguls, and tree runs. Bigger the bumps, bigger the fun.

MF:Drivers will always see a “new to them” feature every time I design a course. You'll find some fast spots, slow spots and a feature or two that will make you think. But I generally like to create a course that is fun for everyone.

JH:You say you like to introduce a “new to them” element when you design. Can you give us a hint, or describe a new or different element you have done in the past?

MF:Well if I give things away, what’s the "challenge" with that?  I can say this: This is the FIRSTyear at the Lincoln site where the finishes are on the outside of the lot instead of both finishing in the inside. I wrote to the SEB about "changing things up" with the course area since having the finishes on the typical "inside" basically dictates the flow of both courses along the south end (grassy area), meaning course feature options are extremely limited. There was some discussion, but an agreement to "give it a shot."  I think that minor element change on both courses will give the variety our competitors like in a Nationals course.

JH:When you design courses, what are the types of tools you use?  Some use paper and pencil, while others are higher tech and use their computer and designing programs.

MF:When I have been assigned a course to design I usually think about the "general" flow of the course in advance before I put anything down. I guess you can say I do it all in my head first -- is that a tool? :)  But when the official version gets "set in stone," I use Visio -- mainly because ease of use and familiarity. I have a template of "shapes" that contain cones, pointer cones, directional cones of three. Then I just drag the shapes into the specific surface template for that particular event site to create the course.

JH:What advice would you give aspiring course designers out there?  What is one of the biggest, most impactful lessons you learned that help make your courses better?

MF:I think it’s important to be familiar with different class cars and how they see and drive the various features they will encounter on the course. For example: An SSR C5 Corvette will drive a course a LOTdifferent than a CS Mazda MX5. A kart will visually see a course different than an FS Camaro. If possible, try to drive in various classed cars over the time of your course designing career. Get a general feel of how that class of car drives the course. Even better if you can drive multiple runs in multiple cars on the same course as it’s eye opening since you, as a course designer, may have had intentions of how a feature should be driven, and in reality it’s nowhere near that for a particular class of car.